Our Advent Pilgrimage continues, and so we sing the next Pilgrim Song of the psalter…

He won’t let you stumble,–
your Guardian God won’t fall asleep.
Not on your life! Israel’s
Guardian will never doze or sleep.

God’s your Guardian,
right at your side to protect you—
Shielding you from sunstroke,
sheltering you from moonstroke.

I wonder if Zechariah read or prayed from his heart these well-known words of his people as he sat in silence with Gabriel’s news and considered the responsibility that lay ahead of him:  raising up the forerunner of the Messiah…his Messiah.

In the midst of Zechariah’s heavenly imposed silence, Good News breaks forth once again through Gabriel, this time with a young virgin.

But before it does, you must first hear the beautiful meaning of the word “advent.”  As you may know, Advent is the name of the first season of the Church Year that includes the four Sundays leading up to Christmas Day, the celebration of Christ’s birth.  It is a season of preparation for the coming of the newborn King.  “Advent” is a Latin word, since Latin was the language used by the early church fathers.  So for us to understand the full, rich meaning of Advent, we consider the complete definition of the original word. 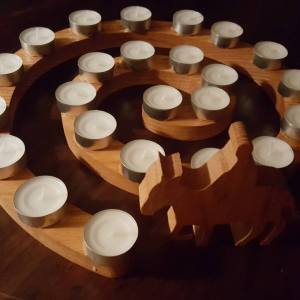 What comes to mind as you read those definitions?

What stirs in your soul as you consider the full meaning of Christ’s first “coming”?

Adventus:  Jesus’ arrival, His approach in human flesh to His people. The Light of the world’s invasion and incursion of the darkness.  Immanuel ripening within His mother’s womb…until the time had fully come.  Messiah’s visitation, His long-awaited appearance to His people, His advent.

As I consider those words, my mind goes to the first words of John, Jesus’ beloved disciple:

“The true light, which gives light to everyone, was coming into the world.  He was in the world, and the world was made through him, yet the world did not know him.  He came to his own, and his own people did not receive him.  But to all who did receive him, who believed in his name, he gave the right to become children of God, who were born, not of blood nor of the will of the flesh nor of the will of man, but of God.  And the Word became flesh and dwelt among us, and we have seen his glory, glory as of the only Son from the Father, full of grace and truth.”  -John 1:9-14

Just now on our pilgrimage, however, there is only one very young woman expecting this Savior.  God’s silence for her is about to be broken with a message that will change the course of her life and the entire world.  In the sixth month of Zechariah’s silence, of Elizabeth’s pregnancy, Mary’s heart and womb are about to expand with the ripening of the Promised One.

I wonder if Mary “looked to the hills” of Nazareth and prayed our Pilgrim Song prior to hearing Gabriel’s adventus news?  I wonder.  What do you wonder?